In a New Achievement for Bahraini Women: Dr. Resala Abdulla AlAdraj appointed as Head of the Computer Science Branch at the Organization of Electrical and Electronics Engineers 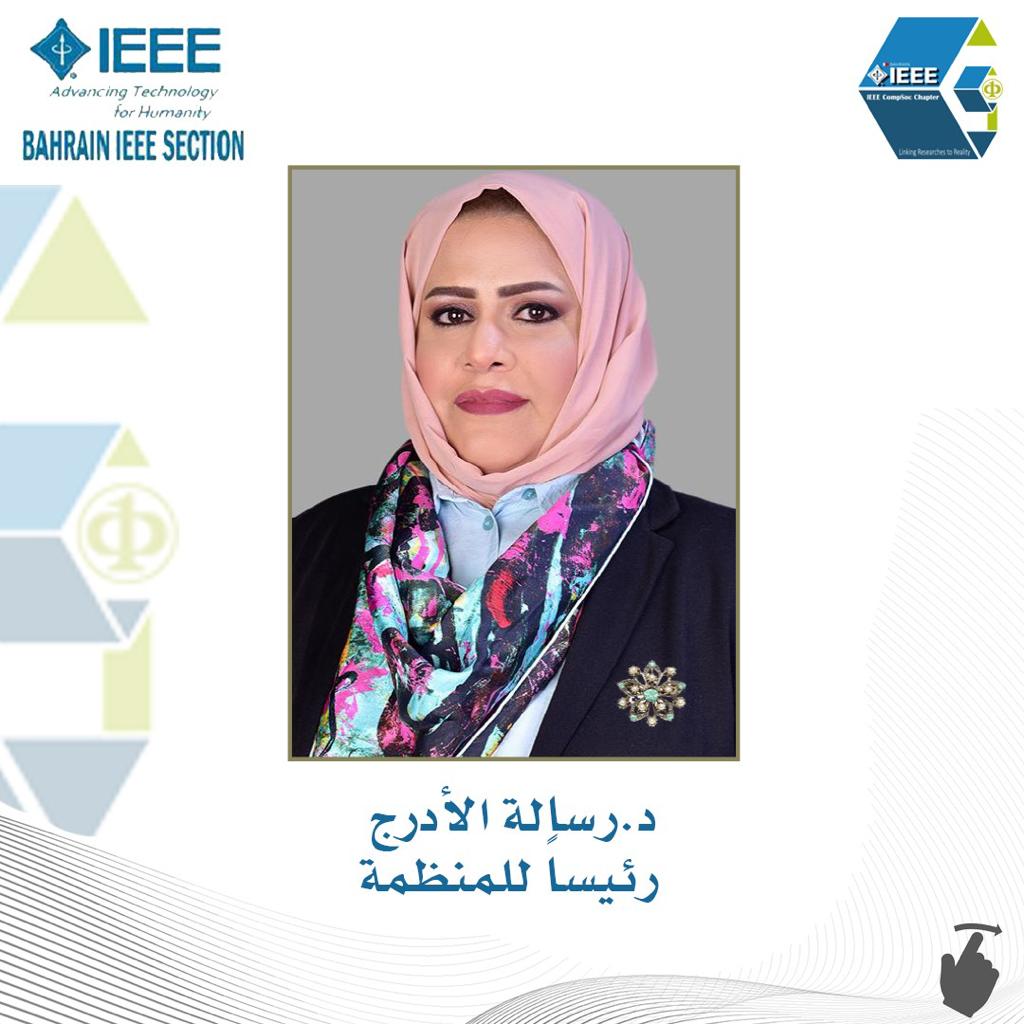 The Institute of Electrical and Electronics Engineers (IEEE), based in the United States of America, has chosen Dr. Resala Abdulla AlAdraj, a faculty member at the College of Information Technology at the University of Bahrain, to head the Institute’s computer science branch in the Kingdom of Bahrain, within its second consecutive session. This reflects that the international Institute trusts in Bahraini competencies qualified to occupy such positions, which is considered a new international achievement of Bahraini women.

The results of the session of November 2022 revealed that faculty members at the College of Information Technology at the University of Bahrain had been appointed in all the administrative positions in the Institute. The assistant professor in the Department of Computer Science at the College of Information Technology Dr. Mohammad Abdullah Qadumi had been elected as Vice President, the assistant professor in computer science, Dr. Abdullah Ahmed Al-Asadi as Financial Secretary, and Assistant Professor in the Information Systems Department, Dr. Amal Mohammad Al-Rayes as Secretary.

On her part, Dr. Resala Abdulla AlAdraj expressed her thanks and appreciation to the international organization for renewing trust in her to assume the presidency for the next two years, in order to continue implementing the plans and programs that the organization started during the past two years, through spreading technical awareness, helping young people to innovate in the field of information technology as well as organizing technical events, taking advantage of the Global capabilities of the organization.

Dr. AlAdraj stated that she full appreciates the Institute of Electrical and Electronics Engineers of the United States of America for its continuous support. She also thanked the members for their votes, which reflect the trust of the international community in the efforts exerted by Bahraini women in the field of technologies and computers, noting that her election in this post demonstrates that Bahraini women can assume leadership positions.

Dr. AlAdraj stated that the branch of the Kingdom of Bahrain was established in the Kingdom of Bahrain in 2018, and it could accomplish many achievements in terms of cooperation with local universities, most notable of which is the University of Bahrain. Many events, tailored workshops and motivational and encouraging student forums were organized. She noted that outstanding student graduation projects will be published and nominated for participation in conferences and events organized by the Institute in various countries, as it holds more than 300 scientific conferences annually.

Dr. AlAdraj added, “We will continue implementing our approved programs targeting IT students. Although the previous session was affected by the Coronavirus pandemic, we adhered to health measures and could achieve our objectives through video communication technology.”

Dr. AlAdraj confirmed that a joint meeting will be held with the members to set plans for the new session, which will last for two years. The directives of the President of the University of Bahrain, Dr. Jawaher Al-Mudhahki, will be followed to achieve more coordination and cooperation with this prestigious educational edifice. In addition, meetings will be held with a number of leaders and officials to introduce the objective and activities of the Institute to them.

It is noteworthy that Dr. Resala Abdulla AlAdraj holds a Master’s degree (2000) and a PhD degree (2015) in Technology Management in Computer Science from the University of Warwick, UK, and a Higher Diploma in Academic Practice from York St John University in the UK.

The Institute of Electrical and Electronics Engineers, based in New York, USA, is the largest professional institute in the world, with more than 480,000 members from 160 countries, and 333 regional branches spread over 10 geographical regions around the world.

The Institute aims to promote educational and technical development in the fields of electrical, electronic, computer engineering and the like.