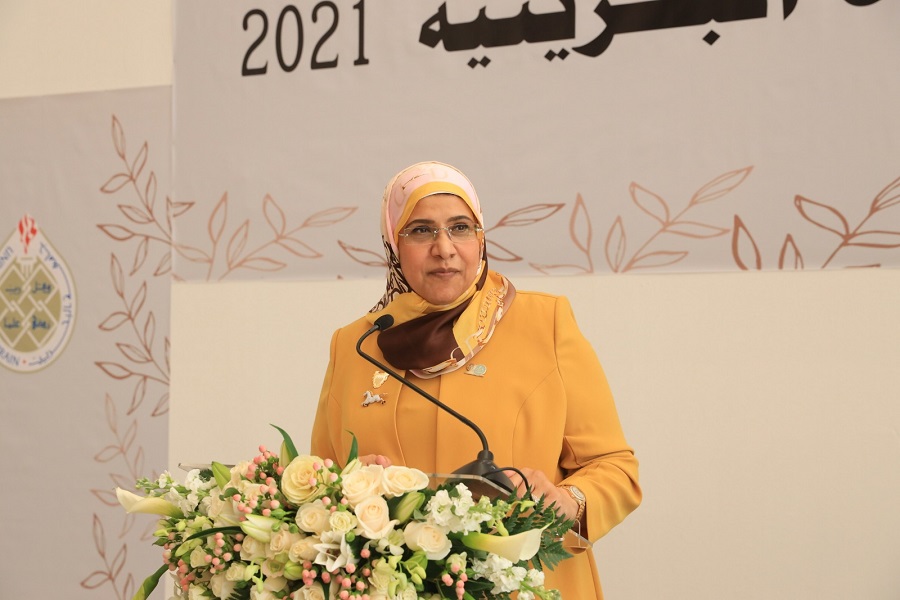 The President of the University of Bahrain, Dr. Jawaher bint Shaheen Al-Mudhahki, lauded the achievements of Bahraini women, during the past twenty years of the Supreme Council for Women, during the prosperous era of His Majesty King Hamad bin Isa Al Khalifa, King of the Kingdom of Bahrain, may God protect him.

The President of the University of Bahrain, in her speech at the University of Bahrain’s celebration of Bahraini Women’s Day on Thursday December 2, 2021, extended congratulations and blessings to Her Royal Highness Princess Sabeeka bint Ibrahim Al Khalifa, wife of HH the King and President of the Supreme Council for Women, and to Bahraini women on the occasion of Bahraini Women’s Day, which coincides this year with the celebration of the 20th anniversary of the establishment of the Supreme Council for Women.

Dr. Al-Mudhahki indicated that “the Supreme Council for Women seeks to motivate women to unleash their potentials and demonstrate their capabilities, in one of the national initiatives promoting gender equality. The Council continued its efforts to integrate women in all sectors.” She explained “women were allowed to be judges and assume more legislative and educational positions. They have assumed more prominent roles in the boards of directors of companies, and assumed leadership positions in the public and private sectors. The numbers of women have constantly increased in many sectors, especially in university education.”

Dr. Al-Mudhahki added, “Women have increasingly engaged in the two sectors of labor market; public and private. This is because all national sectors believe in the capabilities and potentials of Bahraini women, and that they can contribute to the development of any field, while maintaining their social and family roles, which are equally important, as they play a major role in the preparation of the young generations, in a manner compatible with the dreams and aspirations of the nation.”

For her part, the Dean of the College of Information Technology and Chairperson of the Equal Opportunity Committee at the University of Bahrain, Dr. Lamia Mohammad Al Jasmi, expressed her pride in “the role of the University of Bahrain in providing the labor market with qualified women contributing to the national development. The University enhances the status of women and their role as a key partner in decision-making and development in the various fields, including education, health, business, law, engineering, technology, and other sectors. Whenever a new horizon or a new field opens, women are eager to contribute thereto and be leaders thereof at the local or international levels.

Dr. Al Jasmi, stated, “The University of Bahrain was keen to offer academic programs that keep pace with changes in the global economy, innovations and technological trends, and the needs of the labor market,” noting that the members of the women’s academic and administrative bodies amount to 44% of the total number of university employees. She added that the number of academic programs exceeds 120 programs in the undergraduate and postgraduate levels, and that percentage of female students studying in the undergraduate programs is 64%, and that of female students in the postgraduate studies is 69%. This clearly indicates that women strive to develop their abilities and skills for life.

Dr. Al Jasmi talked about the future plans of the Equal Opportunity Committee, stating that “We seek to intensify career guidance programs for female students, in order to raise the percentage of the participation of Bahraini women in the labor market, reduce the percentage of female job seekers, and prepare equal opportunity policy at the University of Bahrain, to address equal opportunity in recruitment, training, retention and promotion, as well as seeking to increase women’s participation in external committees and national events.