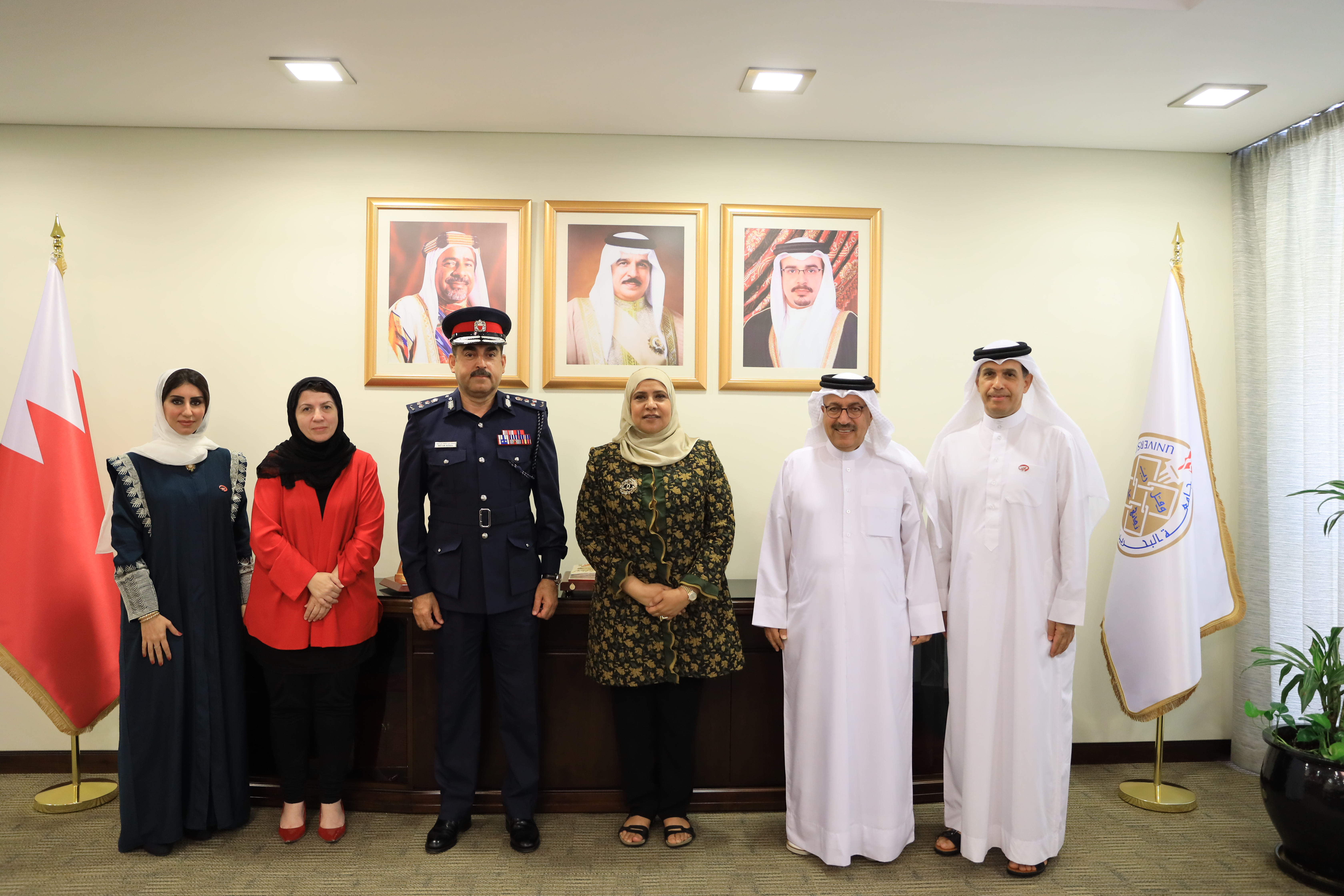 Sakhir – University of Bahrain
13 June 2022
During the meeting held today at the University, Dr. Jawaher bint Shaheen Al-Mudhahki, President of the University of Bahrain (UoB), and Brigadier General Mohammed bin Dina, General Supervisor of the Executive Office of the National Plan to Enhance National Belonging and Consolidate the Values of Citizenship (Bahrainouna), discussed a number of topics that contribute to enhancing national belonging and consolidating the values of citizenship.
At the beginning of the meeting, the President of UoB commended the support and interest of General Sheikh Rashid bin Abdullah Al Khalifa, Minister of Interior and Chairman of the Follow-up Committee for the Implementation of the National Plan to Enhance National Belonging and Consolidate the Values of Citizenship (Bahrainouna), which stems from the well-established national constants and contributes to strengthening the road map on which the pillars of the national plan initiatives and its basic principles are built.
Moreover, Al-Mudhahki noted the importance of continuing efforts through conducting and implementing specialized educational plans and programs focusing on introducing our ancient heritage stemming from our Arab surroundings with its rich civilization, taking pride in the principles of our true religion that call for tolerance and moderation, the development of national culture, and the consolidation of the concepts of positive citizenship in thought and practice in line with the royal vision of His Majesty the King.
For his part, Brigadier General Mohammed bin Dina praised the activities and academic programs offered by UoB, considering the University a “mini-society” where students from all regions meet, bringing with them their diversity, which the Kingdom of Bahrain is proud of, being one of the most important models of coexistence between different sects and thoughts, which has existed for decades, and was established by the leadership of His Majesty the King.
This meeting, which was held in the presence of Hala Suleiman, Director of the Executive Office and a number of university officials, comes within the efforts aimed at activating the role of UoB to implement the initiatives of the national plan through the employment of scientific research and academic studies, and harnessing the capabilities and abilities of the University in promoting national constants among all members of society, and within the framework of an integrated methodology among all partners to put all initiatives, of over one hundred initiatives, into practice.
During the meeting, the importance of continuing cooperation and coordination between the two sides was emphasized within the framework of benefiting from the University’s research and academic capabilities and expansion of joint curricula and student activities of a national character that contribute to inspiring authentic Bahraini values, transferring them from one generation to another, and consolidating the spirit of national belonging in the framework of achieving the goals of “Bahrainouna”, as the two sides reviewed a number of programs that could be included in the activities of UoB in the near future, and aim to enhance the values of citizenship and national belonging.
It is worth noting that the National Plan to Enhance National Belonging and Consolidate the Values of Citizenship offers more than 100 different initiatives that include 5 main tracks: affiliation programs, public relations campaigns, media, curricula and courses, and legislation and regulations, in addition to national performance indicators that aim to measure variations in citizens’ attitudes regarding national belonging and citizenship values, and measuring the effectiveness of these initiatives and their impact on society.