With Research Conducted for The First Time in The Fields of Health, Insurance and Finance UoB Discusses 12 Master’s Thesis in Big Data Science and Analysis 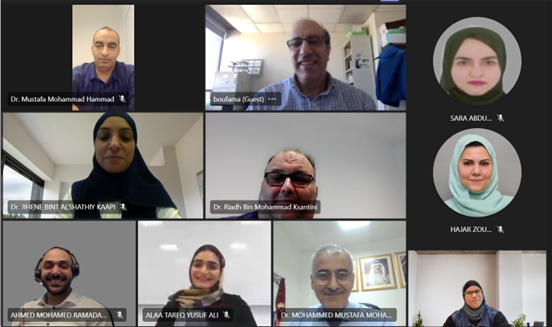 University of Bahrain (Yasmeen Khalaf)
8 June 2022
The University of Bahrain (UoB) recently discussed 12 master’s theses in big data science and analysis, some of which dealt with scientific and life fields for the first time, as part of the graduation of the second batch of the program offered by the Colleges of Science and Information Technology at UoB in 2019 and approved by Liverpool John Moores University in the United Kingdom, as it is the first program of its kind locally and regionally.
The President of UoB, Dr. Jawaher bint Shaheen Al-Mudhahki, congratulated the deans of the two colleges, expressing her pride and happiness for achieving this accomplishment, especially since the number of graduates has doubled in its second batch, reflecting the success of the program and the remarkable turnout for enrollment in it.
Dr. Al-Mudhahki emphasized the prominent role played by UoB as an essential contributor to science in the Kingdom, and the attention given by the University to postgraduate students, in the interest of the Bahraini society, by providing graduates with specialized skills, enabling them to support the Kingdom’s economy.
For his part, the Dean of the College of Science, Prof. Dr. Mohammed Mustafa Al-Hilo, congratulated the students on their remarkable success, and urged them to continue working with the supervisors to publish their theses in the refereed scientific journals. Also, he expressed his gratitude for the outstanding work carried out by the program’s administrative committee, under the direction of Dr. Sawsan Juma’a Hilal.
Over the course of three continuous weeks (9-24 May 2022), UoB conducted a discussion of master’s theses in Big Data Science and Analysis on the University campus in Sakhir, and its research varied to cover a wide range of areas of practical life, some of which are studies being addressed for the first time, to include several aspects, the most important of which are: the use of deep learning in bots-detection, especially with their development and diversity, and thus reduce their negative impact. Also, one study examined the use of the same technique to create a model for calculating the premium, while another student discussed the possibility of predicting the success of start-ups. In addition, another graduate student did a detailed study in which he used several models based on evidence science and deep learning to predict the movements of cryptocurrencies.
It is worth noting that the students’ research dealt with several areas, including: health, business, insurance, and others, as big data analysis has become an important topic in all areas of life.
The theses were well received by the external examiners, in terms of the quality of the work presented, which reflects the effort made by the students, under the supervision of a distinguished academic staff, which confirmed to the examinees the extent to which the students benefited from the knowledge and skills provided by the program.